The text messages were clear, to the point, and in stark violation of Georgia’s open records laws.

“So I would be as unhelpful as possible.”

“Drag this out as long as possible.”

“And provide the information in the most confusing format possible.”

Sent back in March 2017 from the then Atlanta mayor’s spokesperson to an official with city’s watershed management department, the messages instructed how to handle requests for records made by television station WSB and The Atlanta Journal Constitution.

Hard-working reporters at WSB-TV and the AJC had been probing whether properties associated with the mayor and his family were thousands of dollars in arrears in payments for water services. 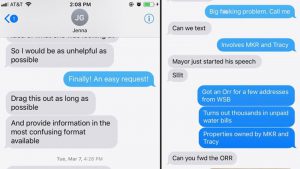 “Big [expletive] problem,” the water department official wrote to the mayor’s spokesperson, beginning the profanity-laced exchange of texts. “Got an ORR for a few addresses from WSB. Turns out thousands in unpaid water bills. Properties owned by MKR [Mayor Kasim Reed] and Tracy [Reed, the mayor’s brother].”

Ultimately, the “big [expletive] problem” that the city faced was not the embarrassing water bills, but the efforts to block the public from finding out about them.  And the fallout has led to what could be a model for open government for Georgia.

For years, citizens and journalists had complained that a slow-to-no response on records requests was standard for the city, so when the text messages came emerged almost exactly a year after they were written, they were a smoking gun.

“Any person or entity knowingly and willfully … frustrating or attempting to frustrate the access to records by intentionally making records difficult to obtain or review shall be guilty of a misdemeanor,” the Georgia open records statute says.

We at the Georgia First Amendment Foundation took a tough stand.

“That’s the kind of thing you cannot do in a democracy,” I told WSB-TV in a March 8, 2018 interview. “This is the exact kind of thing that the state’s Sunshine Laws were set up to prevent. There’s no doubt in my mind that the attorney general should be looking into this.”

The next month, the AJC and WSB filed a complaint with Carr, alleging “a culture of political interference” with open records requests at Atlanta City Hall, and requesting mediation to implement reforms for repeated violations of state law.

The AJC and WSB-TV settled with the city in early October. Under the terms, the City Council and new Mayor Keisha Lance Bottoms agreed to take substantial steps to increase transparency and also to pay the news organizations $80,000 as partial reimbursement of legal fees.

As for the settlement from the city, The Atlanta Journal-Constitution and WSB-TV announced an $80,000 donation to the Georgia First Amendment Foundation.  We plan to use the money to provide open government training across Georgia.

The Atlanta City Hall episode has illustrated for public officials the risks of not following the open records laws and raised interest in learning how to comply.  That interest was on full display in October in Alpharetta, Georgia, when more than 40 public officials – including many records custodians – attended one of Georgia First Amendment Foundation’s training sessions explaining the requirements and intricacies of the state’s open government laws.  In their questions, the officials showed they were enthusiastic about the benefits of open government and anxious to do the right thing.

Now the city of Atlanta must provide similar training for its staff and elected officials as it implements the new ordinance and works to live up to its promises. If it does, Atlanta not only will give citizens the access to government that is their constitutional right, it will set an example for every city, county and state agency to follow.

One of our open government heroes is the late Georgia Supreme Court Chief Justice Charles Weltner, who wrote in his landmark 1992 opinion, Davis v. City of Macon, “Because public men and women are amenable ‘at all times’ to the people, they must conduct the public’s business out in the open.”

Twenty-six years later, those words still ring with clarity, a useful reminder for all public officials in Georgia that failing to comply with the law can quickly become a “big [expletive] problem” and how transparency is always the best solution.

Griffiths is president of the Georgia First Amendment Foundation.  Before he retired in 2017, Griffiths spent 43 years as a journalist, the last 20 overseeing CNN’s global editorial quality controls.

A conversation with Bethany Barnes, investigative reporter, The Oregonian

Ethan: I’m Ethan Magoc, a journalist at the Innovation News Center at the University of Florida’s College of Journalism and Communications. Today I’m speaking with... 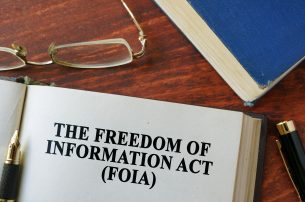 The University of Florida College of Journalism and Communications (UFCJC) and the National Freedom of Information Coalition (NFOIC) today announced that NFOIC will be relocating...