Government agencies throughout the country are enforcing broad policies forbidding public employees from speaking to the news media without approval, even though federal courts repeatedly have declared such policies unconstitutional, the Brechner Center for Freedom of Information documents in a new report.

The Brechner Center issue brief, “The First Amendment and Public Employees’ Right to Speak to the Media,” documents nearly two dozen instances in which courts have struck down workplace policies that forbid employees from giving interviews without approval from a supervisor or a public-relations officer. Despite this string of court victories for employees, the issue brief finds agencies at all levels of government — federal, state and local – continue restricting their employees’ speech in legally questionable ways.

“There’s widespread ignorance that public-relations offices have no legal authority to forbid public employees from speaking to the news media.” said Frank D. LoMonte, director of the Brechner Center and lead author of the issue brief. “Whether it’s called a rule or a policy or a handbook, the result has been the same every time an employee has challenged a requirement to get approval before speaking to journalists: The employee always wins and the agency always loses.” 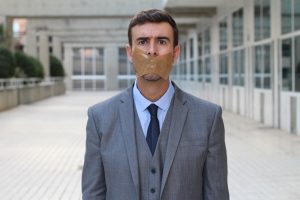 The Brechner Center study documents more than 20 successful First Amendment challenges to agency prohibitions on speaking with the press and public, including federal appeals-court rulings from Texas (overturning a sheriff’s policy against “unauthorized public statements”) and New York (invalidating a social-service agency’s ban on releasing any information to the media “regarding any policies or activities of the Agency.”

Policies that have been struck down as unconstitutional include a Michigan fire department’s regulation providing that only the fire chief could “release facts regarding fire department matters, fires or other emergencies to the news media,” and a Connecticut police agency’s policy forbidding officers from making “official comments relative to department policy” to members of the press or public without approval.

Through a combination of online searches and freedom-of-information requests, Brechner Center researchers readily found dozens of examples of policies, at all levels of government, that are near-identical to those declared unconstitutional by federal courts. For example, a police department in Colorado tells employees: “At no time shall any employee of this department make any comment or release any official information to the media without prior approval from a supervisor or the designated Department media representative.” A New Jersey school district’s regulations provide: “The Superintendent must approve in advance interviews between staff members or pupils and media representatives(.)”

Journalists frequently complain that their inability to get on-the-record interviews with experts at government agencies forces them to rely on prepared statements from public-relations officers or make do with unnamed sources, both of which undermine the quality and trustworthiness of reporting.

In the report, the Center draws a roadmap for news organizations to bring legal challenges to gag policies that interfere with their newsgathering. The roadmap is based on decades of case law in the context of gag orders imposed by judges during high-profile criminal trials, which news organizations have successfully challenged as infringing the First Amendment.

Release of the issue brief is part of the Center’s “Government Gagged Project,” which is dedicated to developing solutions that improve journalists’ access to essential news sources. In January 2019, the Center released a companion report, “Employees’ Right to Speak to the Media: Challenging Workplace Gag Policies,” documenting how employees in the private sector — who are not protected by the First Amendment, but have free-speech protections under the National Labor Relations Act — are being unlawfully restrained from speaking to the press and public.

Read the full report: “The First Amendment and Public Employees’ Right to Speak to the Media.”

Sara Ganim, University of Florida College of Journalism and Communications Brechner Center for Freedom of Information Hearst Journalism Fellow and Pulitzer Prize-winning journalist, is the...