In a newly published white paper, lawyers with the University of Florida’s Brechner Center for Freedom of Information explain that federal labor law forbids private-sector employers from barring their employees from speaking to the news media without supervisory approval.

The First Amendment does not apply to decisions made by private employers, but workers in the private sector enjoy some free-speech protection courtesy of the National Labor Relations Act (“NLRA”).

Congress enacted the NLRA in 1935 to guarantee workers the right to engage in “concerted activity” to improve working conditions. The National Labor Relations Board (“NLRB”) has interpreted the statute to apply to discussing workplace issues with the media, because workers may seek public support to change their employer’s practices. So, in the Board’s view, a policy requiring employees to keep all work-related information confidential — or to clear all interactions with journalists with a corporate P.R. office — is an unlawful labor practice.

For instance, in 2017, a U.S. district judge in Illinois ordered an airport security company, Universal Security, to rescind its policy prohibiting employees from talking to the media, and to reinstate two O’Hare International Airport guards who were fired for violating the policy. 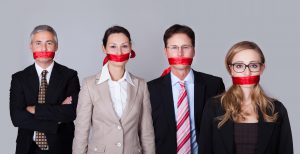 Nevertheless, Brechner research indicates that policies broadly restricting corporate employees from speaking to the news media are commonplace, likely because employers and employees are unaware of the rights the NLRA provides.

Confidentiality policies struck down as unlawfully broad by the NLRB and federal courts include:

● A trucking line’s employment contract classifying “personnel information and documents” among numerous categories of confidential information that “must stay within” the company.
● A locomotive manufacturer’s pre-employment non-disclosure agreement forbidding employees from discussing “compensation, payments, correspondence, job history, reimbursements, and personnel records” with any third party without supervisory approval.
● A health benefit corporation’s confidentiality policy that prohibited disclosing “any material or information” about the company, specifically including anything about the company’s “financial and business affairs,” and that also prohibited employees from “disparaging remarks” about the company or doing anything harmful to the reputation of the business or its owners.

Among the companies found to be violating the NLRA was the (since-renamed) Trump Marina Casino Resort in Atlantic City. In a 2009 ruling, the NLRB ordered the Trump resort to rescind a company policy providing that only specified top managers could speak with the media, after a union representative complained he was reprimanded for violating the policy.

Importantly, the NLRA has limits. Only non-supervisory employees are protected, and “supervisor” has a broad reach. Junior attorneys at law firms have been treated as “supervisory” by the NLRB, as have college professors. Overtly religious institutions, such as Christian colleges, are also exempt if they have a primarily sectarian mission. And the NLRA applies only to employers that do some measurable level of interstate business, not “mom-and-pop” local shops.

In recent years, the Board has signaled its willingness to revisit pro-worker rulings and to afford greater deference to managerial decisions. Nevertheless, the precedent against blanket gag orders is well-entrenched and will not be easily overturned.

In one of the few Trump administration cases addressing the issue, an NLRB judge ruled Nov. 2, 2018, that a hospital company, Eastern Maine Healthcare Systems, acted unlawfully in firing an employee for writing an unflattering letter-to-the-editor, in violation of a hospital policy against unapproved media contacts.

The employer’s policy stated that employees were forbidden from releasing any information about the hospital to the media “without the direct involvement” of hospital administration, and that any media inquiry must be forwarded to the hospital’s community-relations office. The judge found that policy to be so intimidating to employees that it violated the NLRA.

Narrowly drawn confidentiality policies are legally permissible. The NLRA allows employers to penalize employees for leaking trade secrets, disclosing confidential customer information, or falsely holding themselves out as speaking on the company’s behalf. The Brechner report recommends that employers consider more tailored confidentiality policies, to avoid legal liability for excessively “gagging” their employees, and to promote better accountability and transparency in workplace governance.