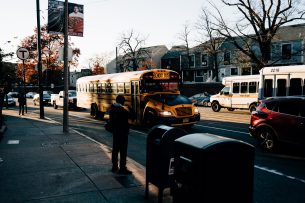 A surveillance video that captured an altercation between a high-school student and an adult volunteer is a public record that must be turned over to journalists, a Pennsylvania appeals court ruled Monday, turning aside the school district’s claim that federal privacy law required keeping the footage confidential. In a 3-0…

Newsworthy video from school surveillance cameras can’t be withheld from the public on the grounds of student privacy, a group of open-government groups argues in a brief filed with a Pennsylvania appeals court. The brief, authored by the Brechner Center’s Frank LoMonte and David Jadon, supports television journalists from Harrisburg who used their state’s Right-to-Know-Law to request footage of a school-bus security camera that captured an altercation between a parent and a student.