Open-government advocates and the New Mexico attorney general are weighing in behind a sports blogger in his quest for public records withheld by a state university that has “privatized” its fundraising operations.

The case challenges the University of New Mexico’s use of nonprofit “auxiliary” corporations as a tactic to conceal otherwise-public records from scrutiny, an increasingly common practice at state universities everywhere.

In a brief filed Nov. 4 with the New Mexico Court of Appeals, the Brechner Center for Freedom of Information and the NM Foundation for Open Government (“NMFOG”) argue that public agencies should not be allowed to evade state open-government laws by creating shell corporations that are “private” in name only. 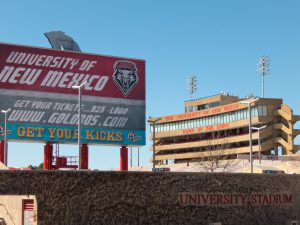 The amicus brief supports reporter Daniel Libit, whose website, The Intercollegiate, focuses on investigative reporting about the business side of sports. Libit requested documents from the UNM Foundation and from the athletic department’s Lobo Club, which raises money to support UNM sports — only to be told that those organizations do not consider themselves bound by the New Mexico Inspection of Public Records Act.

The brief points out that open-government laws exist to ensure the public that agencies like the University of New Mexico are handling money properly. But when millions of dollars are funneled into universities through shell corporations (including at UNM, where the university foundation raises more than $87 million a year), the public cannot see whether money is being collected and spent lawfully and ethically:

The public has a considerable interest in how this money is raised and spent on UNM’s behalf, and that interest is not diminished by the fact that UNM has created a separate entity to conduct such matters.

A New Mexico trial court ruled in Libit’s favor in 2019, finding that UNM’s fundraising functions were “inherently public” regardless of whether a nominally private arm of the university performed those duties.

Also on Nov. 5, New Mexico Attorney General Hector Balderas weighed in with a brief supporting Libit’s entitlement to UNM records. Balderas has repeatedly criticized the university for resisting transparency amid questions about whether the Lobos athletic department mishandled public money.

Courts across the country have seen through the artifice of incorporation and given requesters access to university records regardless of whether those records are “parked” with nonprofit units that the universities created and control — such as in Kentucky, where in 2008 the state Supreme Court held that the University of Louisville Foundation was, functionally, a state government agency subject to the state open records statute.

As the brief explains, there is no real separation between university fundraising operations and the universities themselves, and in fact donors to universities are not told that their money is going to independently operated nonprofit corporations. Universities can be held financially responsible for the improvident financial decisions of their purportedly “separate” foundations, as recently happened at the University of Wisconsin-Oshkosh, which was forced to pay $6.3 million when its private fundraising arm went bankrupt after risky investments failed.

The Brechner Center is taking part in the case as part of its Shadow Governments initiative, which works to counteract government agencies’ growing use of privatization to undermine state open-government laws.

Frank LoMonte, University of Florida College of Journalism and Communications Brechner Center for Freedom of Information director, is the author of “Lawsuits Over Bans on...

Frank LoMonte, University of Florida College of Journalism and Communications Brechner Center for Freedom of Information director, is quoted in “Federal Speech Rulings May Embolden...