The brief, prepared by attorneys with the Brechner Center for Freedom of Information, asks the justices to accept the case of New Mexico medical student Paul Hunt, who was punished under a campus civility code for using sharp, profane language in a Facebook post about his opposition to abortion.

Hunt’s case has the potential to set a legal standard for students’ free-speech rights when they use social media — an issue that has frequently been litigated in recent years with no clear legal consensus.

The Supreme Court has recognized strong First Amendment protection for college students when they engage in on-campus political speech. But lower courts have weakened that protection and allowed public colleges and 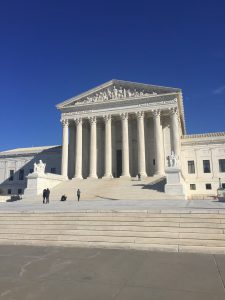 universities to impose discipline when students use “unprofessional” language on social media.

“We have been needing authoritative guidance from the Supreme Court for over a decade on where the boundaries of colleges’ authority begin and end when students are speaking off-campus on their personal time,” said UF journalism professor Frank LoMonte, director of the Brechner Center and a First Amendment lawyer. “The courts in Paul Hunt’s case left no stopping point to colleges’ punitive authority, and that’s dangerous for student commentators and whistleblowers who need to know that they can safely speak out about issues of public concern without fear of retaliation.”

Monday’s brief was prepared with the assistance of attorneys Sommer Ingram Dean and Michael Hiestand of the Washington, D.C.-based Student Press Law Center (“SPLC”). The SPLC co-signed the brief along with the Electronic Frontier Foundation and the National Coalition Against Censorship.

The case began in 2012, when Hunt, a student at the University of New Mexico medical school, posted a comment on his personal Facebook news feed calling Democrats “sick, disgusting people” for their support of abortion rights. The comment was reported to administrators at the medical college, who told Hunt he was in violation of UNM’s “Respectful Campus Policy,” which made it a punishable disciplinary offense to engage in “untrue allegations, unduly inflammatory statements or unduly personal attacks.” The college initiated disciplinary action against Hunt, including ordering him to rewrite the post using milder language.

Hunt sued, but a U.S. district court and then the federal Tenth Circuit U.S. Court of Appeals found that he could not recover damages against UNM administrators. The courts decided that university officials were eligible to claim immunity from damages because they did not violate any “clearly established” First Amendment legal standards. The courts cited caselaw in other states allowing colleges to discipline students for speech that violates “professional standards,” a newfound exemption to the First Amendment never recognized by the Supreme Court.

In Monday’s friend-of-the-court brief, free-speech advocates argue that decades’ worth of Supreme Court precedent put university administrators on clear notice that political speech by college students is entitled to the highest First Amendment protection, and cannot be grounds for punishment short of a “substantial” disruption to campus functions. There was no disruption at UNM and no evidence that anyone reported feeling threatened or harassed by the Facebook post, which did not mention the university or anyone attending it.

“This case exemplifies exactly why state government officials cannot be given 24/7 ‘professionalism policing’ authority over students’ speech during their off-hours: Because it is an invitation to censor the core political speech that the First Amendment most rigorously protects,” the brief states.

The Supreme Court is expected to decide by the end of its June 30 term whether to accept the case, which would be argued in the next term beginning Oct. 5.

Frank LoMonte, University of Florida College of Journalism and Communications Brechner Center for Freedom of Information director, was quoted in “Cops as ‘Victims’ Court Ruling...