In the latest legal skirmish over the ability of public universities to regulate what students post on social media pages, free-speech organizations are backing the appeal of a New Mexico medical student punished for a profane political rant on Facebook.

The case presents a possible vehicle for the U.S. Supreme Court to eventually provide long-awaited guidance on a frequently litigated First Amendment issue: Do educational institutions have punitive authority over off-campus, online speech comparable to their authority over in-school speech? 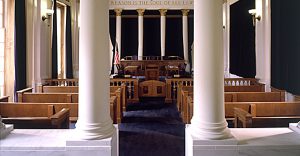 In a brief filed Feb. 7 with the U.S. Court of Appeals for the Tenth Circuit, the Brechner Center for Freedom of Information and a coalition of other free-expression organizations argue that speech on personal time posted to Facebook should be more insulated from school punitive authority than on-campus speech, because online speech must be sought out by readers and is readily avoided with a click:

“A standard empowering college administrators to penalize
‘unprofessional’ or ‘disrespectful’ speech on off-campus social media sweeps in a breathtaking amount of constitutionally protected speech – speech that will impermissibly be chilled by the fear of career-derailing punishment.”

The Tenth Circuit is being asked to decide whether the University of New Mexico overstepped the First Amendment in disciplining 24-year-old medical student Paul Hunt over a vitriolic post on his personal Facebook wall denouncing the abortion-rights movement. The November 2012 post used strong profanity in comparing supporters of legal abortion to Nazis. Although the post did not name any individuals or mention the University or Hunt’s affiliation with it, Hunt was brought up on student conduct charges after UNM received complaints that his speech was uncivil.

Hunt was punished under the university’s “respectful speech” code, which provides for disciplinary action if a student engages in “unduly inflammatory” speech. The sanctions included being forced to rewrite and re-post the commentary using more “professionally appropriate” language.

Hunt challenged the disciplinary action as a violation of his First Amendment rights. But in a September 2018 ruling, a U.S. district judge threw out his claims against the individual UNM decisionmakers, finding that the law governing online speech is so unclear that the administrators couldn’t have known whether they were acting illegally.

The Brechner Center amicus brief emphasizes the potential of the district court’s ruling to inhibit political debate — the most protected form of speech — on the campus of a public university, where the free exchange of even extreme and unpopular ideas is supposed to be most welcome:

“The question in this case is whether colleges can discipline students for nondisruptive, off-campus speech merely because the college feels the speech is ‘unprofessional.’ Answering ‘yes’ to this question would put far too much discretion in the hands of government institutions to silence critics and whistleblowers.”

The brief notes that the district court failed to afford Hunt even the protection that would have applied to in-school speech within a K-12 school. The Supreme Court has said that nothing short of a “material” and “substantial” disruption of school operations can justify punishing a student speaker, even down to the middle-school level. The district court embraced the idea that a college student in his mid-20s might have less legally protected freedom than an eighth-grader, because of greater expectations of professionalism — even though “unprofessionalism” has never been recognized as an exception to the First Amendment.

University of Denver law professor Justin F. Marceau, a First Amendment expert, filed the brief on behalf of the Brechner Center, the Student Press Law Center, the Electronic Frontier Foundation, and the National Coalition Against Censorship.

The Supreme Court has never taken a case involving school or college discipline for online speech, despite repeated calls to clarify uncertainty about the boundaries of educators’ punitive authority. Some lower courts have treated online speech as equivalent to in-school speech, while others have required proof that the speech intentionally “targeted” the school in a way that foreseeably would provoke a substantial disruption.

If the Tenth Circuit disagrees with the lower court’s “professional speech” standard, it could present a split of legal authority with the St. Louis-based Eighth U.S. Circuit Court of Appeals, making the case ripe for Supreme Court review.

In a 2016 case involving a Minnesota community-college student, the Eighth Circuit decided that a college can punish a student for non-disruptive speech on social media that falls short of the “established professional standards” of the student’s intended occupation. The Brechner Center amicus brief urges the Tenth Circuit to reject this never-before-recognized First Amendment exemption, which runs contrary to the Supreme Court’s history of affording college students far greater free-speech protection than K-12 students.