Public universities should release records showing how they punish students found liable for committing serious crimes on campus, a coalition of open-government advocates argues in a brief filed with the North Carolina Supreme Court.

An amicus brief authored by Brechner Center attorneys and joined by the Student Press Law Center supports the right of college journalists at the University of North Carolina-Chapel Hill to obtain records of disciplinary outcomes that UNC is withholding.

UNC lawyers have argued that Family Educational Rights and Privacy Act (“FERPA”) gives them the option whether to honor or reject journalists’ requests for records involving student discipline. The North Carolina Court of Appeals rejected that argument in an April 2018 ruling, ordering the university to produce the requested documents. UNC is now appealing.

At issue is a 1998 exemption to FERPA that Congress enacted to give the public access to information about the outcome of especially serious cases processed through student conduct boards that would otherwise remain secret. FERPA normally requires educational institutions to keep records of students’ disciplinary cases confidential, but Congress carved out a subset of serious criminal behavior as exempt from the privacy law.

When reporters with UNC’s student newspaper, The Daily Tar Heel, tried to take advantage of that FERPA exemption to see how UNC was handling sexual assault cases through its Office of Student Conduct, UNC claimed that the exemption did not apply. The newspaper filed suit, leading to the case now pending at the state Supreme Court. 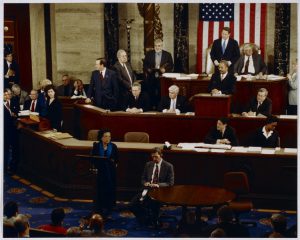 The brief describes the legislative history of how the FERPA exemption was enacted with the specific purpose of overturning an erroneous interpretation by the U.S. Department of Education that enabled universities to conceal dangerous crimes on the grounds of student privacy.

As the brief explains, Rep. Mark Foley, R-Fla., lead sponsor of the FERPA amendment, said on the floor of the House at the time:

Escalating violence on college campuses across the Nation require that Congress clarify the intent of FERPA. … [W]hen a university finds through its own disciplinary proceedings that a student has committed an act of violence, such as sexual assault, the university community has a right to know about it.

Foley’s understanding of the effect and purpose of the amendment was reinforced by a half-dozen other floor speeches by proponents from both parties; no one spoke in favor of continued secrecy.

“Any claim of FERPA confidentiality by a university seeking to avoid disclosure of
potentially embarrassing records must be met with skepticism, as educational institutions have been caught regularly abusing FERPA for illicit concealment purposes,” says the brief, which was filed Jan. 29.

The brief also responds to UNC’s contention that, regardless of the law, universities should be allowed to keep information about student disciplinary cases secret because confidentiality will encourage victims to report crimes:

Two facts are indisputable: Media attention to sexual assault on college campuses has dramatically increased since 2012, and the number of people coming forward to report sexual assaults has greatly increased over that same period. There is no empirical basis for the University’s assertion that the FERPA exemption must be disregarded so as to cause more rapes to be reported.

The brief was prepared and filed with the assistance of attorney Jonathan D. Jones of J.D. Jones Law, PLLC, in Durham.