Attorneys for the Brechner Center and a coalition of open-government groups are urging Pennsylvania’s highest court to reaffirm that journalists are entitled to view video from school surveillance cameras that capture newsworthy information.

A brief filed Wednesday with the Pennsylvania Supreme Court argues that footage from security cameras cannot be withheld on the grounds of a federal privacy law that makes “education records” confidential.

The statute — the Family Educational Rights and Privacy Act, or FERPA — is widely misapplied by schools and colleges to withhold records that are neither educational nor confidential, says the friend-of-the-court brief, filed by attorneys Mark Bailen and Chad Rutkowski of Baker Hostetler LLP.

The amicus brief supports television journalists from Harrisburg, who used their state’s Right-to-Know-Law to request footage from a school-bus camera that captured an altercation between a parent and a student athlete on the return trip from a basketball game. 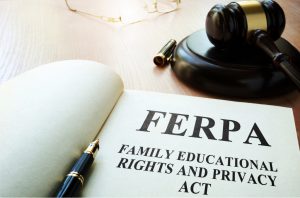 In an August 2017 decision, a trial judge ordered the records released. The judge found that FERPA applies only to “education records” maintained centrally with the student’s permanent file, not to a security video that is typically held in the district’s transportation office for a brief period and then erased.

The Pennsylvania Commonwealth Court affirmed that ruling last December and ordered the Central Dauphin School District to turn over the footage.

The Brechner Center filed its brief, along with the National Freedom of Information Coalition, the Student Press Law Center and the Society of Professional Journalists, to ask the state Supreme Court to leave December’s ruling intact and turn down the school district’s petition for review. The brief explains:

“The privacy interests involved in behavior aboard a school bus – a space that is scarcely ‘private’ – are minimal compared with the overriding public interest in making sure that schools are safe and that school authorities discharge their safety duties properly.”

The brief points out that access to school security videos has been critical for journalists to expose shortcomings in school safety, including recently at Broward County’s Majorie Stoneman Douglas High School, where access to video footage enabled reporters for The Sun-Sentinel to piece together failings by school personnel and law enforcement that delayed the apprehension of a mass shooter.

Because of school over-compliance with FERPA, families have been denied access to video footage that would help them understand how their own children were hurt or killed, the brief explains. It highlights the case of a critically injured 7-year-old Arkansas boy whose parents were forced to go to court to compel their child’s school to turn over footage showing how he got hurt, which doctors urgently needed to aid in his treatment: “If the Court countenances the School District’s irrationally broad interpretation of FERPA here, more such abuses will proliferate.”

The brief points out that the U.S. Department of Education, which is the sole enforcer of FERPA, cannot impose penalties for a one-time release of public records in compliance with a court order, so the school district’s contention that release of the video will expose the district to FERPA sanctions is unfounded. Indeed, the brief notes, no school or college has ever been fined in the 45-year history of FERPA, because the law penalizes only a “policy or practice” of releasing confidential student records, not a single release of records that state law makes public.